As a politician and political philosopher of constitution, federalism, and state sovereignty, John Caldwell Calhoun (1782–1850) was the most preeminent spokesperson for the antebellum South. Born near Calhoun Mills, Abbeville District (presently Mount Carmel, McCormick County), in the South Carolina upcountry on March 18, 1782, Calhoun graduated from Yale College in 1804. After his education in the North, Calhoun returned home, practiced law, and served as a member of the South Carolina House of Representatives from 1808 to 1809.

At the age of 28, Calhoun entered the national political arena and represented South Carolina in the U.S. House of Representatives from 1811 to 1817, when he resigned to become the secretary of war. An ardent nationalist during this early period of his political career, Calhoun distinguished himself as one of the “War Hawks.” Using his influence as acting chair of the House Committee on Foreign Relations, Calhoun urged the War of 1812 with Great Britain to redeem the honor of his country in the face of Britain’s disregard of American neutral rights. After the war, Calhoun proposed several reconstruction measures in support of Representative Henry Clay’s nation-building program known as the American System. He advocated chartering the Second Bank of the United States to stabilize the necessary currency and encouraged federal spending for internal improvements to build a nationwide network of roads and canals. Calhoun also supported the Tariff of 1816 to eliminate the increased national debt due to the war and to protect his country’s fledgling industry. Though unknown to Calhoun then, the tariff issue was soon to ignite an inflammatory controversy. 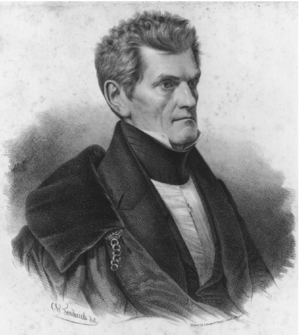 Having served as secretary of war under President James Monroe’s administration from 1817 to 1825, Calhoun became vice president of the United States in 1825 under the administration of President John Quincy Adams. It was during his first term as vice president when the tariff issue eventually came to the forefront, exposing the emerging economic conflicts between the North and the South. The cotton planters throughout South Carolina and the rest of the agrarian South, who detested a protective tariff to ensure their staple exportation overseas, began to perceive that a series of federal tariff policies was only designed to protect the industrial interests in the North at the expense of the cotton-producing southern states. When the Tariff of 1828, which became widely known as the Tariff of Abominations, was enacted, the tariff issue was no longer an economic issue alone. It now also encompassed the old debate as to the extent of federal power in the young union. Calhoun’s nationalist sentiments were gradually strained, and he turned himself into a states’ rights advocate and sectionalist.

Responding to his constituents’ rising criticism of the federal tariff policies and also sensing the bleak prospect of disunion advanced in his native state, Calhoun anonymously penned the South Carolina Exposition and Protest for the state legislature during the summer and fall of 1828. While finding himself in the grave dilemma of privately thwarting the tariff measure enacted by the administration that he was a part of as vice president, Calhoun looked for a constitutional alternative to possible revolutionary action. Resurrecting the compact theory embodied in the language of the 1798 Kentucky and Virginia Resolutions fathered by Thomas Jefferson and James Madison respectively, Calhoun advanced the doctrine of nullification. In the South Carolina Exposition, Calhoun argued that the U.S. Constitution was a compact among the states and that each state could not only interpose (that is, block) its authority between the citizens of that state and the laws of the United States, but also nullify (that is, overrule) such laws and actions as being unconstitutional and inoperative in the state. Calhoun’s Exposition thus became a standard of revolt against the American System of protective tariffs and a clarion call for devising constitutional safeguards to protect the South’s impinged minority interests from the abuse of federal power.

In 1828, Calhoun was reelected vice president with President Andrew Jackson. To the dismay of Calhoun and southern cotton planters, Congress failed to reduce the tariff rate under the new administration. When some South Carolinians became restless and threatened to vindicate the doctrine of nullification, Calhoun issued an open letter entitled “On the Relation which the States and General Government Bear to Each Other,” more popularly known as the “Fort Hill Address,” in the summer of 1831. Using the words “interposition,” “veto,” and “nullification” interchangeably, Calhoun, no longer anonymously, warned that unless some constitutional checks were administered, the sectional conflicts would become interminable, leading eventually to “the dissolution of the Union itself.” When the new Tariff of 1832 provided for reduced tariff revenues but retained the approximately 50 percent rate on cotton and woolen clothing, a special convention of the South Carolina legislature finally formulated its “South Carolina Ordinance of Nullification” in November 1832, proclaiming that the tariff was “null” and “void” within the state. In response, President Jackson denounced nullification as unconstitutional and asked Congress in the following month to enact a “Force Bill” to enforce tariff collections in South Carolina by sending federal troops.

In late December 1832, Calhoun resigned as vice president during South Carolina’s Nullification crisis. Immediately after he left the Jackson administration, Calhoun took a seat as a U.S. senator to defend his state’s position and continually served in that capacity until his death in 1850, except for a brief period when he was appointed as secretary of state. By then, the slavery controversy—an entangling issue with the South’s slave-plantation economy—had become a predominant concern for Calhoun. It was in his 1837 address to the Senate entitled “Speech on the Reception of Abolition Petitions” that Calhoun contributed to the development of the South’s proslavery argument, terming slavery as “a positive good.” As the secretary of state under President John Tyler’s administration from 1844 to 1845, Calhoun negotiated the annexation of Texas and justified it as a means to expand the area open to slavery. Back to the Senate, Calhoun denounced the proposed Compromise of 1850 on the ground that the measure would not adequately protect the South’s slavery interests. Calhoun prepared his last address to the Senate in the midst of the debate over this compromise sponsored by Senator Henry Clay. On March 4, 1850, Calhoun, too ill to deliver the address himself, asked Senator James M. Mason from Virginia to read it for him. Sensing that the union was now “lying dangerously ill,” the dying senator made his final plea that the responsibility of saving the union rested on the North. Only four weeks later, on March 31, 1850, Calhoun passed away in Washington, D.C., at the age of 68.

The essence of Calhoun’s last address was his proposition for restoration of the sectional equilibrium within the union. To achieve this end, Calhoun propounded that each sectional majority (that is, the North or the South) or each major-interest majority (that is, the manufacturing interests or the agricultural interests) should be given the constitutional power to veto on the acts of the federal government, which represented numerical majority. This doctrine of concurrent majority had been expounded in his Disquisition on Government, presenting the case for minority rights within the framework of majority rule. The theory also led Calhoun to conclude that the only adequate means to protect the slavery interests of the South would be the invention of a dual presidency with a northern president and a southern one, each acting concurrently and possessing the definitive veto power. Advancing the doctrine of concurrent majority, Calhoun’s Disquisition later served as an introduction to his much larger Discourse on the Constitution and Government of the United States.

Though history dictates that he was the foremost intellectual figure who influenced the southern secessionists of 1860 to 1861 on the verge of the Civil War, Calhoun never sought that solution. While protecting his region’s interest, Calhoun disparately grappled with what Alexander Hamilton, James Madison, and John Jay had repeatedly pondered in penning The Federalist Papers—“the nature of the Union.” But his final tragedy lies in the fact that his theory of nullification and his defense of the South’s morally indefensible institution of human bondage eventually led the way to the destruction of the union that he had so dearly loved.