President Lyndon B. Johnson (1963–69) had a dramatic impact on federalism through a series of policy, regulatory, and fiscal initiatives broadly defined as the Great Society. During his administration, the federal government took a direct and active role in the policy problems of state and local governments. Specifically, as part of Johnson’s Great Society a flurry of legislation was enacted that has permanently enhanced the role of the federal government and affected its relationship with state and local governments. Johnson’s impact on federalism must be understood in terms of his commitment to fighting poverty and reducing racial injustice. Specifically, his administration was committed to finding “creative” ways to address issues of poverty and racial injustice, including encouraging state and local governments to address certain policy issues and providing federal support to do so, particularly at the local level. His landslide 1964 election, along with the election of a large Democratic majority in Congress who supported his vision, created a short-lived coalition that led to the rapid passage of an array of new intergovernmental programs to carry out his vision. These programs produced changes in every policy sphere, including health care, social welfare, transportation, the environment, housing, and crime and justice. 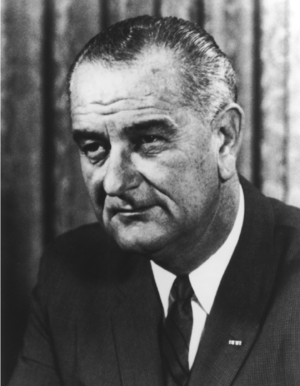 Lyndon B. Johnson. Library of Congress, Prints and Photographs Division.

Several far-reaching pieces of legislation illustrate his impact on the federal system and exemplify his commitment to using the federal government to diminish differences among citizens. For example, during his administration laws such as the Voting Rights Act of 1965, the Civil Rights Act of 1964, and the Fair Housing Act were passed, which attempted to end racial discrimination by reducing state and local autonomy to pass discriminatory laws or conduct discriminatory policies. Further, Johnson and Congress created large new programs such as Medicaid, a joint state-federal program to provide health and long-term care insurance to poor citizens; the Elementary and Secondary Education Act of 1965, which provided federal financial aid to local school districts to help equalize funding differences among them; and the Model Cities program, along with large increases in aid to urban governments. In addition, Johnson created several new government agencies to support his vision of an expanded role for the federal government and assist state and local governments in addressing policy problems, including the Department of Transportation, the Department of Housing and Urban Development, and the Office of Economic Opportunity.

During Johnson’s administration, federalism went through what experts have termed a “creative” phase that greatly expanded the federal government’s role in state and local affairs. Specifically, three key features of federalism emerged in the creative phase: a proliferation of categorical project grants designed to provide financial support to states and localities in order to further national goals, enhanced program planning and a greater focus on administration, and increased citizen and interest group participation in intergovernmental affairs.

While there have been some high-profile attempts to undo some of the Great Society initiatives, such as President Ronald Reagan’s New Federalism effort, many of the programs and policies of the Johnson administration continue to exist and still stimulate controversy, with critics arguing that during this period the federal government expanded its reach too far and fostered too much citizen dependence on government. Supporters argue that Johnson’s more lasting programs have done much to improve the quality of life of the country’s most vulnerable populations and recognize that serving these populations is a shared challenge among all levels of government.