Federalism in America: An Encyclopedia

From Federalism in America
(Redirected from Main Page)
Jump to: navigation, search
Share 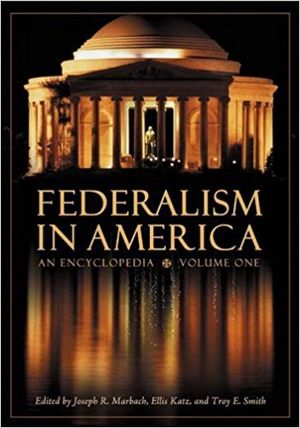 "Federalism and its kindred terms (e.g., 'federal') are used, most broadly, to describe the mode of political organization that unites separate polities into an overarching political system so as to allow each to maintain its fundamental political integrity. Federal systems do this by distributing power among general and constituent governments in a manner designed to protect the existence and authority of all the governments. By requiring that basic policies be made and implemented through negotiation in some form, it enables all to share the system's decision making and decision-making processes." (From the entry "Federalism" by Daniel J. Elazar)

This encyclopedia provides a comprehensive reference explaining the major concepts, institutions, court cases, epochs, personalities, and policies that have shaped, or been shaped by, American federalism. It describes federalism's creation and evolution, and its influence on local, state, and national governmental institutions, procedures, and policies. The models used to explain the various historical eras in the development of federalism are also included. Originally published by Greenwood Press in 2005, this encyclopedia contained over 400 entries relating to American federalism. In its current online form, entries are being added and old ones updated.

Federalism is one of the basic organizing principles of the U.S. Constitution. It has been a deep and enduring force shaping American politics and public policy. Federalism is also the American founders’ unique and remarkable contribution to government and political science. Hence, understanding America's federal system of government is vital to understanding how the American system of government works, and how to participate in and influence it.

While federal structures have spread around the globe, American government remains an important example of how a federal system can be structured, how it evolves, and how it affects government, politics, and policies. Spanning from the drafting of the U.S. Constitution to the nullification crisis, secession and the Civil War, and the post-war amendments to the New Deal, the Second Reconstruction, various New Federalisms, devolution, and the new national security initiatives, the history of American federalism is one of cooperation and conflict over the centralization or decentralization of political power and sovereignty, with profound effects for public policy.

An important feature of American federalism is that U.S. federal, state, and local governments have often been partners in shaping domestic policy. At essence, federalism is the debate over the proper role of government in society, seeking to answer the questions arising over which is the proper government to perform public functions. Thus, every major policy area has been affected by federalism. Additionally, every major political institution has had and continues to share some influence on this dynamic relationship.

The entries in this encyclopedia include long interpretive essays and short descriptive entries. When appropriate, side bars describe specific provisions of the Constitution relevant to various entries. Photographs and maps that illustrate the individuals and events that have shaped the development of American federalism are also included to provide insights into these various aspects of American federalism. The entries can be searched either in alphabetical order or via the topical list.

The editors have attempted to identify the most significant terms, concepts, individuals, and court decisions associated with the development of American federalism that would be relevant to our primary audience—undergraduate students receiving their first exposure to this field of study. Entries were selected by surveying the literature on American federalism and soliciting input from the editorial board, members of the American Political Science Association’s Section on Federalism and Intergovernmental Relations, and other scholars who answered our call for authors. We decided not to include entries on individual scholars, living or deceased. Rather, we have identified their theoretical contributions to the field and have recognized them in this way.

All the entries were assigned to specific authors. In editing these entries, we were careful to maintain the voice and interpretation of each author, and the views and opinions, when expressed, are those of the author and not of any organization with which he or she may be affiliated. Entries that have been updated or revised by someone other than the original author acknowledge both the original and new author.

The original published version was edited by Joseph R. Marbach, Ellis Katz, and Troy E. Smith. The editorial board of scholars who assisted with the 2005 edition are listed in the sidebar. We gratefully acknowledge their support and contributions to this project.

The Center for the Study of Federalism acquired ownership rights to the Encyclopedia in 2016 and provides the content for free via this Website. The Center also provides ongoing support to update the original entries and create new entries. This advances the Center’s mission to support and advance scholarship and public understanding of federal theories, principles, institutions, and processes as practical means of organizing power in free societies.

Qualified individuals interested in writing updates or providing new entries for this encyclopedia should see the Contributors wanted page. Compensation is available for qualified contributors.

Those with inquiries, questions, or corrections related to this encyclopedia should contact Professor Troy E. Smith at troy.smith@byuh.edu.