President Franklin D. Roosevelt (1932–1945) won the 1932 election on the promise to use the federal government to “try something” to alleviate the widespread suffering caused by the Great Depression which saw a quarter of the American labor force out of work, a crumbling economy, and growing despair. Once inaugurated, he assumed and gained through legislative decree new powers and authority for the federal government to regulate commerce and industry and provide public relief. He gained Supreme Court support for his programs, but only after the Supreme Court struck down many of his original initiatives as unconstitutional assumptions of power. Elected to four consecutive presidential terms, Roosevelt transformed American federalism from a system characterized by the separation of powers and responsibilities between the national and state governments to a “cooperative” system characterized by federal and state government cooperation in the implementation, management, and financing of domestic public policies previously forbidden to the federal government.

Roosevelt’s transformation of the American federal system benefited from earlier presidential efforts and political reforms. The New Nationalism program of President Theodore Roosevelt and the national powers assumed by President Woodrow Wilson during World War I cracked the popular notion of dual federalism that strictly divided power and responsibility between the federal and state governments. The Sixteenth Amendment (adopted in 1913), authorizing a federal income tax, provided a stable and potentially productive revenue stream to fund federal programs and policies. The Seventeenth Amendment (1913) made senators accountable to the state’s voters rather than the state’s legislature. All of these contributed to President Roosevelt’s success in giving the federal government greater power and authority over domestic policy. 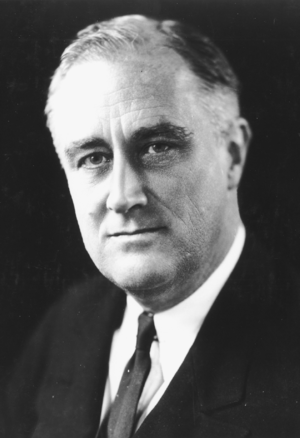 President Roosevelt’s New Deal programs expanded the federal government’s powers. Some of those new powers and responsibilities included: income support for elderly Americans (Social Security); income support for needy families (Aid for Dependent Children); unemployment compensation; minimum wage and maximum hours regulations on industries and trades engaged in intra- and inter-state commerce (National Industrial Recovery Act); price stabilization for manufactured and agricultural goods; and collective bargaining for organized labor. The political consequence of these highly-popular programs was to turn public attention toward the federal government as the government responsible to promote the economy, provide income support for the elderly, poor, and unemployed, and develop underdeveloped regions such as the Tennessee Valley.

The federal government used grants-in-aid to induce state governments to implement, manage, and help finance many of these programs. In return for receiving the federal grants, state governments would have to agree to abide by the program’s restrictions and rules, create agencies to oversee the program, and contribute a share of state funds to the program. This increased the capacity, professionalism, and powers of many state governments. It also created state interest groups and bureaucracies committed to federal programs and standards, thereby limiting state governments’ ability to control their budgets, policies, and the policy agenda.