Among the founders who were serious students of politics, none wrote less about federalism than John Adams (1735–1826). In his major political treatise, the Defence of the Constitutions of Government of the United States, Adams reflected that “to collect together the ancient and modern leagues . . . which have been found to answer the purposes both of government and liberty; to compare them all, with the circumstances, the situation, the geography, the commerce, the population, and the forms of government . . . and consider what further federal powers are wanted, and may be safely given, would be a useful work” (Adams 1787, 364). Yet Adams never wrote such a volume. His writings explored checks and balances within governments, not among governments in a federal union.

In general, Adams held that a confederation was little more than an alliance. In the Defence, he said that the Articles of Confederation created a “diplomatic assembly.” Because each state retained veto power over all significant laws, and because the Confederation lacked any real power to compel the states to comply with its resolutions, it was not truly a government. In effect, Adams thought the Confederation was an expression of intent to coordinate the conduct of foreign affairs among the discrete states. After defeating the British, the Confederation often failed to do even that, making Adams’s diplomatic work very difficult. It was hard to negotiate on behalf of a union that lacked the power to enforce the treaties it signed.

When he first saw the United States’ federal Constitution, Adams approved of it since it followed the model he had drafted for Massachusetts and defended in his writings, featuring an executive with a veto, a bicameral legislature, and separation among the legislative, executive, and judicial branches. Adams made few comments on the federal aspect of the Constitution. The key element of his theory of government was that balance could only be achieved in government if there were three bodies contending for power. When the House, Senate, and president (armed with a veto) squared off against each other, no one institution would achieve a final victory because whenever one grew large the other two would gang up to restrain it. Speaking federally, however, there were only two powers—the central government and the states. Adams thought that either the states or the national government would ultimately have the last word in lawmaking. Although the people could in principle delegate some powers to the states and others to the federal government, they failed to create an institutional mechanism to secure that balance once the Constitution went into effect. 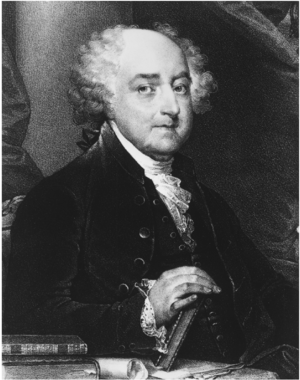 The American’s union, Adams thought, was a federal republic, so he referred to the nation in the plural as “these states.” Moreover, Adams thought it was wise and good to make laws as local as possible. The people of Virginia, of Ohio, and of Massachusetts needed different sets of laws in order to function. Adams nonetheless thought that the general government was in more need of support in his own day than were those of the states. The people had been obeying the laws of their local governments since the colonial era, but the federal government was a novelty to them.

During his presidency, Adams supported and signed, though he had not proposed, the Alien and Sedition Acts. Adams’s support for the Alien Acts grew from the logic of the union. Since the federal government existed to manage the foreign affairs of the union, it certainly had the right to regulate which foreigners may and may not reside in the boundaries of the several states. His support of the Sedition Acts grew from the logic of government. Governments, like individuals, had the right to defend themselves against men who printed vicious and false information about them. Such a right inhered in the definition of government. It was a right that governments had always had in the past, and that they would have in the future.

In sum, Adams believed that the American union was a federation, but, having felt the union suffer from the weakness of the Confederation during his diplomatic tour, his biases were in favor of strengthening the federal power at the expense of that of the states. Moreover, he suspected that in the long run, federalism would prove to be an aspiration rather than an institutional reality.