Since her Senate confirmation in 1981 until her retirement in 2005, Justice Sandra Day O’Connor had been the U.S. Supreme Court’s foremost voice on issues of federalism. In fact, there is a general consensus that her ostensible affinity for President Ronald Reagan’s New Federalism principles was an important factor in her nomination to the Court. She played a vitally important role in the contemporary Court’s reinterpretation of many of its long-standing doctrines involving state institutional sovereignty and legal immunity (Gregory v. Ashcroft 1991), the Tenth Amendment (South Dakota v. Dole 1985), the Commerce Clause (Garcia v. San Antonio Metropolitan Transit Authority 1985), and deference to state judicial authority (Rose v. Lundy 1982).

Federalism concerns long formed a pillar of O’Connor’s system of judicial thinking, and indeed in her political views more generally. There is no doubt that federalism concerns formed the basis of her approach to the Constitution, and she played a pivotal role in the Court’s protection of state governments for over twenty years. She saw many disparate issues through the “lens” of federalism. That is, her professed sensitivity to state government concerns not only was apparent in cases that were overtly involved with federalism questions, but also played a role in a wide range of contexts.

Born in 1930 in El Paso, Texas, O’Connor grew up on a cattle ranch in Arizona. After attending Stanford University, she spent much of her early career working in local and state government, eventually becoming the first woman to serve as majority leader of a state legislature in 1973. She then moved into the Arizona state judiciary, serving on the state’s court of appeals at the time of her U.S. Supreme Court nomination. Most observers believe that O’Connor’s lengthy experience at the state government level led to her often-professed belief in the wisdom and utility of deference to state legislatures, judiciaries, and administrative agencies. 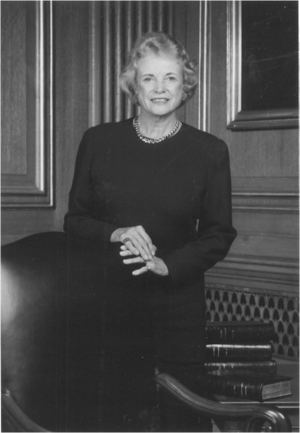 Justice O’Connor was regularly the deciding fifth vote in federalism cases. Her affinity for the prerogatives of state and local governments was not absolute, however. O’Connor’s defense of state sovereignty was particularly subject to revision when a case concerns issues of state protection of, rather than intrusions upon, individual liberties. That is, when civil liberties questions were involved, she tended to support federal government power when states sought to go beyond established national protections for individual rights. In contrast, she was highly deferential to what can be seen as state restrictions on such rights. Notably, she was one of only three Supreme Court justices in the past thirty years who offered greater support for state-level incursions into individual rights than for similar incursions by the federal government.

Finally, her decisive fifth vote in Bush v. Gore (2001), which effectively overruled the Florida Supreme Court’s interpretation of that state’s election laws, has been criticized as being inconsistent with her professed belief in state autonomy. Nevertheless, she can be seen as a defender of the notion that there exists a core of state sovereignty into which the admittedly broad powers of the federal government may simply not intrude. Rather than taking an absolutist and inflexible position regarding federalism issues, O’Connor simply believed that the states enjoy a fundamental sphere of sovereignty, especially with regard to their internal organization, institutions, and administration, which cannot be impinged upon by the federal government.