Theodore Roosevelt (1858–1919), the twenty-sixth president of the United States, recast the presidency into an institution of national political leadership by pursing an aggressive public agenda of social and economic reform and courting public approval. Given the horrific lessons of the Civil War, Roosevelt believed that protecting the welfare of citizens was the highest objective of government, and he sought a “new nationalism” that emphasized equal opportunity and fair play among social groups and individuals. To achieve this objective, Roosevelt significantly enhanced the powers of the national government through redistribution of wealth, attacks on corruption, and preservation of the environment. 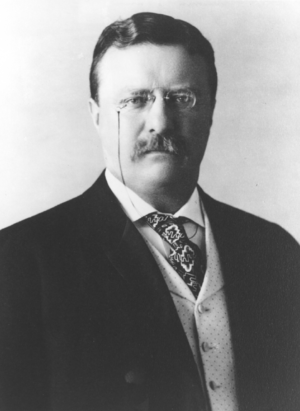 Recognizing the power of popular support in policy disputes with Congress, Roosevelt sought public approval of his programs through frequent public speeches and popular proposals. From the outset of his first administration, Roosevelt recognized the growing demand for reform expressed in the writings of the Muckrakers. The United States, at the turn of the twentieth century, experienced vast social change due to rapid industrialization and immigration. A large wealth and power gap ensued between the upper and lower classes. Roosevelt and fellow Progressives were concerned about the political marginalization of new immigrants in the industrialized United States. Roosevelt’s domestic policy program designed to mitigate or alleviate these problems became known as the Square Deal.

Roosevelt redefined the president’s powers as limited only by the specific restrictions and prohibitions that appeared in the Constitution. With this new and broader understanding of presidential power, Roosevelt championed significant economic and social reforms. While he successfully busted some trusts (the Roosevelt administration initiated forty-plus suits against trusts throughout his tenure in office), Roosevelt preferred regulating large corporations over dissolving them. Roosevelt’s first term also established the Department of Commerce and Labor and enabled federal irrigation projects through the Reclamation Act of 1902.

In his second term, Roosevelt guided the Heburn Act (1906) through Congress. The act revitalized the Interstate Commerce Commission, extending greater government control over the railroad industry, the dominant form of transportation at the time. Increasingly concerned with conservation throughout his second term, Roosevelt established five national parks, eighteen national monuments, and fifty-one wildlife refuges via the Antiquities Act. Roosevelt’s second term also regulated food production and consumption through the Meat Inspections Act (1906) and the Pure Food and Drug Act (1906).

Roosevelt’s Square Deal generated significant political reform in a time of vast social change. Roosevelt is remembered as a dynamic and powerful president who gave the president a national profile as a political leader by broadening the executive’s powers, using the “bully pulpit” to influence policy making, and championing the welfare of the people. With a new vision of American nationalism, Roosevelt and fellow Progressives reshaped the American political landscape and provided a cornerstone for the New Deal and modern presidency.