The U.S. Supreme Court under Chief Justice William H. Rehnquist has issued a number of five-to-four decisions concerning federalism. Associate Justice Clarence Thomas (1991– ) has voted with the majority in decisions that have limited the scope of Congress’s power and have expanded the protection of state sovereign immunity.

Clarence Thomas is best known for his conservative views on civil rights. He chaired the Equal Employment Opportunity Commission for almost a decade before becoming a judge, and he has written a number of opinions during his tenure as the second African American to serve on the nation’s highest court that run counter to the group rights orientation of traditional civil rights organizations such as the NAACP. However, several of Justice Thomas’s most important opinions have involved federalism.

For example, in United States v. Lopez (1995) the Court declared unconstitutional by a five-to-four vote the Gun-Free School Zones Act, a federal law that had made it a crime to possess a firearm within 1,000 feet of a school. Although Justice Thomas agreed with the chief justice’s opinion for the Court in that case, he penned a concurring opinion to suggest that the Court’s “case law has drifted far from the original understanding of the Commerce Clause.” In short, Justice Thomas insisted, the Commerce Clause, as originally understood, does not authorize the degree of federal power Congress has been employing since the New Deal era. 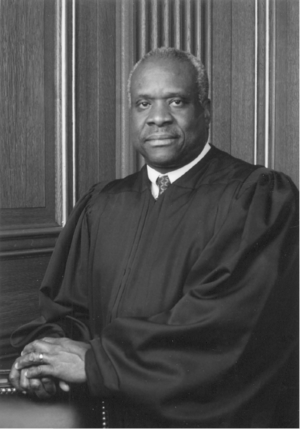 Another of Justice Thomas’s major federalism opinions came in dissent—one of the few times he has been in the minority in federalism cases—in U.S. Term Limits, Inc. v. Thornton (1995). Term Limits was decided during the height of a national movement to put a stop to careerism in Congress. The Supreme Court, in a five-to-four decision in the case, effectively ended the movement. However, what made Term Limits one of the most important federalism decisions the Court has ever issued was the battle between the Justice John Paul Stevens–led majority and the Justice Thomas–led minority over the proper conception of American federalism. Justice Stevens’s opinion for the Court was premised on the belief that the people of the United States, collectively, are the source of the legitimate powers of any and all governments (what has been called the “national” theory of federalism). Justice Thomas’s dissenting opinion, in contrast, posited that the national government was brought into existence by a compact among sovereign states (the so-called compact theory of federalism).

What ties together Justice Thomas’s federalism decisions is his commitment to protecting individual rights. As he remarked in a 1999 speech, federalism, like the separation of powers, is a “structural safeguard for individual liberty. . . . This is a theme that has been unnoticed, but which underlies the Court’s current federalism jurisprudence.”