A four-time governor of Alabama and four-time presidential candidate, George C. Wallace (1919–98) represented segregationist views during the 1950's and 1960's regarding federal intervention into state affairs, particularly in regard to racial policies. But by his fourth term as Alabama’s chief executive, Wallace had renounced his belief in “Segregation now, segregation forever” and asked for forgiveness, and received substantial support, from black Alabamians.

While he espoused a strong belief in segregation through the 1970's, Wallace’s belief was grounded in the notion of states’ rights and against federal intervention in state government affairs, particularly in regard to the federal government protecting civil rights for black Americans against state government action (or inaction). Ironically, Wallace began his political career as a moderate on racial issues, until he was defeated in his first bid for governor. Campaigning as a staunch segregationist and winning the 1962 gubernatorial race, Wallace tapped into white southern fears about the federal intervention over civil rights policies, most notably demonstrated by his schoolhouse stand against federal orders integrating the University of Alabama.

Following his subsequent “reelection” through his wife as a proxy governor, Wallace carried his antifederal government campaign into presidential politics, beginning in 1964. His most notable victories came in 1968, when he carried five southern states as the American Independent Party candidate. Wallace turned his attention from racial policies to anti-Communist and antifederal government, in preparation for his next presidential bid. Following another election victory as governor in 1971, and his victory against then–Vice President Hubert Humphrey in Florida’s 1972 Democratic presidential primary, Wallace was shot on the campaign trail in Maryland. Paralyzed and confined to a hospital, he won several primaries, but lost the 1972 Democratic nomination. He returned to serve two more terms as Alabama’s chief executive, and won substantial black support in his fourth, and final, term, after renouncing his segregationist views and asking for forgiveness from black leaders. 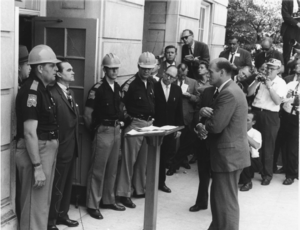 He died in 1998, leaving a legacy that some scholars believe had a profound impact on American politics. Symbolizing the states’ rights and segregationist attitudes of the 1950's and 1960's, Wallace heralded the movement of white Southerners to the Republican Party, but in the end, came to rely on black voters to create a populist coalition in the 1980's for his final gubernatorial term.