The Confederate States of America (CSA) had two constitutions, a Provisional Constitution that was in effect from February 8, 1861, to February 18, 1862, until the Permanent Constitution, ratified March 1861, became operational. The Provisional Constitution was expeditiously adopted in order to establish a provisional national government. It was modeled after the U.S. Constitution, with the notable exceptions of a unicameral legislature with each state having one vote and the president being elected by the Congress to serve one six-year term.

During the transition from the U.S. to the CSA Constitutions, U.S. statutes and case law remained in force unless repealed by the CSA Congress or overturned by CSA courts. The CSA Constitution was firmly grounded in American constitutionalism. The CSA’s constitutional innovations reflected the southern states’ preference for states’ rights and not rejection of unionism per se. They were very much convinced of the utility of membership in a voluntary union consisting of other states acting in concert for their collective interests. They were also convinced that the Union from which they recently seceded provided a constitutional blueprint from which to structure a reformed union geared toward the collective interests of its member states. 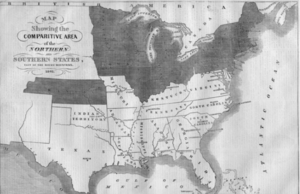 Map showing the Confederate States of America. Courtesy of Son of the South (www.sonofthesouth.net).

The CSA preamble affirms that the people of the Confederacy ordained and established the CSA Constitution through their respective states, “each State acting in its sovereign and independent character.” A national constitution ordained and established by the people of the nation places the national unit as the principal and the states as its agents, whereas a national constitution with the states as the principals and the national government as their agent alters the power relations between the national and state governments. Accordingly, if a state is not the source of authority (i.e., a principal), it cannot withdraw that authority from the national government when its interests dictate that it should. The CSA preamble clarifies that it was the individual states, not the collective national will of the people, that are the principals. Moreover, the CSA framers deleted the phrases “provide for the common defense” and “promote the general Welfare” in the attempt to particularize the document’s application to the states, in contradistinction to a general application to the people of the CSA. This is closer to the commitment to states’ rights found in Article II of the Articles of Confederation: “Each State retains its sovereignty, freedom and independence, and every Power, Jurisdiction and rights, which is not by this confederation expressly delegated to the United States, in Congress assembled.”

The purpose of the CSA Constitution was to form a “permanent federal government,” not a “more perfect Union.” In his late antebellum statements, President Lincoln put the southern states on notice that “if destruction of the Union, by one, or by a part only, of the States, be lawfully possible, the Union is less perfect than before; the Constitution having lost the vital element of perpetuity.” As the Confederate framers insisted, a perfect union is one that is based upon the consent of its members, the states. Accordingly, the permanent CSA federal government stemmed from the CSA union. If the latter ceased to exist—that is, it being dissolved by the states, either individually within the borders of a particular state or collectively among all the states—the federal government would by default cease to exist. The CSA logic is (1) the states individually and voluntarily acceded to the CSA union delegated powers to realize certain common policy objectives shared with the other states, (2) states are subject to the jurisdiction of the CSA government’s delegated powers while members of the CSA union, and (3) a state’s secession from the CSA union placed the seceded state outside the jurisdiction of the CSA’s delegated powers. In other words, the states do not exist for the union, but the union exists for the states. The “perfection” of the union is contingent upon its capacity to serve the interests of its member states, and not a perpetuity held coercively intact. This is why the framers of the CSA Constitution considered including a secession clause, but decided that such a clause would be superfluous in a voluntary union based upon the active consent of its member states.

The CSA Constitution also lacks the “general Welfare” clause as an objective of the union or the Congress. Removal of this phrase prevented the CSA Congress from exercising a general police power and intruding upon the police powers of the states.

The preamble invokes “the favor and guidance of Almighty God.” Incorporating this transcendental order directly into the CSA Constitution made God the guarantor of its terms and the Constitution more than a legal document; it was a covenant among the states contingent upon their willingness to morally and ethically interact with one another.

In contrast to the U.S. Constitution, the CSA Constitution’s vestment clause (Article I, Section 1) “delegates” rather than “grants” all legislative power to a Congress. The significance of this word change was made clear in the landmark case McCulloch v. Maryland (1819), through which Chief Justice John Marshall conferred on the national government granted legislative powers that, unlike delegated powers, may not be recalled by a state or states, but only collectively by the American people.

The CSA’s preference for the states is reaffirmed in the reserved state powers, or Tenth Amendment. The CSA Tenth Amendment reads, “The powers not delegated to the Confederate States by the Constitution, nor prohibited by it to the States, are reserved to the States, respectively, or to the people thereof.” Except for the last word, this is a duplicate of the U.S. Constitution’s Tenth Amendment. The word “thereof ” in the CSA Constitution neutralizes the prospects that the American people constitute an alternative repository of power to the states. Indeed, CSA powers are exercised directly on the Confederate people, but with states as the guardians as to how those powers are to be exercised. The addition of this word was intended to resolve uncertainties between the national and state governments over delegated and reserved powers.

Anticipating a deluge of immigration from northern states and abroad as the Confederacy commercially prospered, the Constitution disqualified foreign-born citizens from voting in elections for members of the House of Representatives (Article I, Section 2, Clause 1). By essentially disenfranchising nonindigenous Southerners, CSA framers manifest an appreciation of a southern community and attempted to prevent any relocated northern or western interests from percolating upward. However, new states were admitted to the Confederacy upon a two-thirds vote in the House and Senate (with the Senate voting by state; Article IV, Section 3). So, nonsouthern interests could have a voice in CSA politics, but only as a state—and such a state could only be admitted by two-thirds vote, whereas in the U.S. Constitution admission to the union requires only a majority vote.

State preeminence over the national government was affirmed by authorizing states to impeach federal judges and officers by a two-thirds vote of both branches of that state’s legislature (Article I, Section 2). The CSA Congress could circumvent this state impeachment power by assigning CSA judicial and other federal officers beyond the limits of any one state. But such circumvention was unlikely, given the strong states’ rights mindset of the Confederacy. The provision is a strong indication that the states were not to be subservient to CSA judges and bureaucrats, but the two-thirds vote requirement made that accountability judicially respectable.

Unlike the U.S. government, the CSA Constitution allowed executive officials a seat in both chambers of Congress to discuss measures pertaining to their department (Article I, Section 6, Clause 2). Unlike a committee hearing where executive department heads are questioned by legislators, this innovation was a nod toward cabinet government, through which cooperation between the two branches of government was to be enhanced, especially in light of the president being limited to a nonreeligible six-year term (Article II, Section 1).

The CSA Constitution authorized the president to line-item veto appropriations (Article I, Section 7, Clause 2). This provision provided the president with the means to thwart regional majorities from gaining the legislative advantage over regional minorities, a prominent concern of the southern states as they watched their influence in legislative politics decline.

Congress’s appropriation power was constitutionally limited. These limitations included prohibitions against protectionist tariffs, internal improvements (except those paid by the users of and expended in those ports where paid to cover operational expenses), discharging debts through bankruptcy, and privatizing the CSA post office in 1863. Furthermore, Congress had to specify exact dollar amounts; it had to limit all bills and laws to one subject, noted in the title; and export duties and appropriation bills required a two-thirds majority vote (Article I, Sections 8 and 9).

The CSA Constitution’s slave-related provisions acknowledged the slave issue to be of national importance and intentionally curtailed states’ rights to import slaves from outside the Confederacy (Article I, Section 9, Clauses 1 and 2). The CSA Constitution let states determine whether to be slave or free, but, reflecting the Dred Scott U.S. Supreme Court decision, protected the right of owners to transit with their slaves through the CSA’s states and territories (Article IV, Sections 2 and 3). However, strong consensus regarding slavery was likely guaranteed by prohibiting nonnative Southerners from voting for federal officials and by the two-thirds vote of the House and Senate required to admit new states, free or slave, into the Confederacy.

In the attempt to shore up states’ rights in the event of the more mundane checks and balances breaking down, 3 states could convene a constitutional convention to address the concerns of a small minority of states (Article V, Section 1). Proposed constitutional amendments were ratified by a two-thirds approval of either state legislatures or state conventions. Technically, this could tie up the CSA government for long periods of time. But consensus of all member states, and not national governmental efficiency, was the objective. This clause was designed to procure the former.

The common thread that held these states together under the compact of the CSA Constitution was their commitment to states’ rights, a commitment that has its origins in the American Anti-Federalist and Jeffersonian traditions of American federalism. The exigencies of war led the CSA to exercise powers that rankled states’ rights advocates, such as national conscription and impressment policies. But, as noted above, the CSA Constitution equipped the states to reclaim the policy prerogatives of states’ rights by constraining the legislative powers of the CSA Congress, limiting the CSA president to a onetime six-year term, empowering the states to impeach CSA officials, lowering the bar to convene constitutional conventions, and, if all else fails, seceding from the CSA. This was a form of American federalism much more resistant to the centralization of policy prerogatives at the national level and predicated upon the consent of all the states to a much greater extent than the U.S. Union.