Drafted by Thomas Jefferson and passed under the Articles of Confederation, the Northwest Ordinance of 1784 issued a plan for governing the public region west of the Appalachian Mountains, north of the Ohio River, and east of the Mississippi River. Then known as the Old Northwest, this land had been ceded to the federal government by 7 of the original colonies whose charters claimed often overlapping borders extending throughout the territory.

The ordinance embraced the principle that the western lands should be transformed into states and incorporated into the union on an equal basis with the original 13. Jefferson’s proposal stipulated that the Old Northwest would be divided into fourteen rectangular commonwealths. Each would proceed through consecutive stages of self-government culminating with statehood. The ordinance declared that the region would be forever subject to the federal government and required its developed areas to assume a proportional part of the national debt incurred during the revolutionary war. It promised support for public education and guaranteed residents the same basic civil rights available in the original states. Jefferson also included provisions forbidding citizenship to any person with a hereditary title and prohibiting slavery in the territory after 1800, which would have applied not only to the Old Northwest but also to all future land cessions made by states to the federal government as well. When Congress approved the plan on April 23, 1784, these provisions, along with the ordinance’s specific breakdown of states and their proposed names, were dropped. 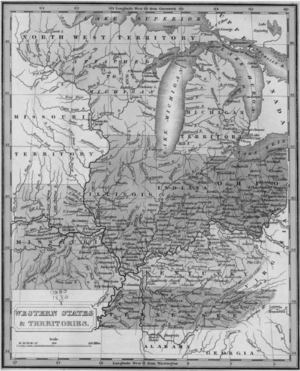 Map of the upper territories of the United States. Courtesy of the Wisconsin Historical Society.

But territorial governments were not scheduled to be instituted until land titles had been transferred through the federal government from Native Americans to private owners. Consequently, the legislation never took effect. The Land Ordinance of 1785 introduced a system to divide and sell public land, attracting squatters and large-scale speculators to the region. The Ohio Company of Associates, an influential land speculation firm, drew on government connections to pressure Congress to protect legitimate land titles and secure order in the Ohio Valley. This prompted the passage of a revised version of the 1784 Ordinance in 1787.

The Northwest Ordinance of 1787 retained the essential features of its predecessor. It guaranteed civil liberties and ensured eventual access to all the rights and responsibilities of citizenship. It also forbade slavery, but only within the boundaries of the Old Northwest. Although its specific rules governing the progression to statehood required a lengthier territorial apprenticeship, the 1787 Ordinance’s blueprint for the orderly expansion of the nation was inspired by the Northwest Ordinance of 1784. Nearly all the states that later joined the union followed this plan.