President Ronald Reagan’s (1911–2004) importance in the consideration of American federalism is attributable to executive branch policies that diminished the federal government’s funding and oversight responsibilities for social welfare programs in the 1980's.

Reagan’s effort to reduce federal expenditures for social programs has been termed “New Federalism.” The basic components of these New Federalism policies included the consolidation of categorical grants into block grants (an approach that began during Richard Nixon’s presidency [1969–74]), a general reduction in the size of grants to state governments, and the reduction of federally mandated regulations for program oversight. 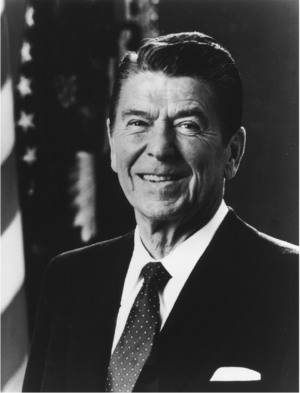 Reagan did not advocate the federal government’s complete withdrawal from providing social program outlays. Instead, the policies were intended to reduce the breadth and scope of federal social expenditures, which burgeoned under President Lyndon Johnson’s Great Society programs in the 1960's.

Specifically, Reagan called for the reduction of federal funding for programs related to employment training, economic development, urban renewal, and welfare, among others.

By 1984, and with congressional approval, federal grants to state governments were reduced by approximately 25 percent. The reduction of federal social program expenditures required increased programmatic outlays and administration on the part of state governments. The increased responsibility for program solvency placed states in the position of having to raise additional revenue, which created budgetary and political challenges for those facing budget shortfalls.

Reagan’s interpretative basis for New Federalism centered on premises iterated in the Tenth Amendment of the Bill of Rights. Throughout his presidency (1981–89), Reagan employed his formidable speech-making skills to present his federalism policies to the electorate. Yet Reagan also set New Federalism into policy, most notably through Executive Order 12612, which was signed in 1987. That order states, in part,

Federalism is rooted in the knowledge that our political liberties are best assured by limiting the size and scope of the national government. . . . In most areas of governmental concern, the States uniquely possess the constitutional authority, the resources, and the competence to discern the sentiments of the people and to govern accordingly.

The lasting impact of Reagan’s New Federalism remains unclear. The funding challenges created by antiterrorism efforts and rising health care costs raise questions concerning the appropriate calibration of federal and state revenue sharing, specifically, whether states can maintain fiscal responsibility for both social welfare and security programs without an increase in federal outlays and subsequent control.

In whichever direction the interpretation of federalism moves as the result of public expectations related to government services, Reagan’s New Federalism remains the primary template for the reduction of federal funding and oversight of social programs, and the corresponding increase in state and local responsibility for these programs.