For forty years, from 1812 until his death in 1852 at age 70, Daniel Webster (1782–1852) played a dominant role as a lawyer, orator, congressman, senator, and secretary of state, and was founder of the Whig Party in 1832. As a Federalist politician and later as a Whig, he earned a reputation as the United States’ most eloquent nationalist at a time of growing sectional strife and as a defender of the union against secessionists in magnificent Senate speeches.

Webster was born on January 18, 1782. He was educated at home, at Philips Exeter Academy, and at Dartmouth College. Upon graduation he turned his eyes to the study of law, was admitted to the Massachusetts bar in 1805, and quickly made his name as an attorney. Webster married Grace Fletcher, a 27-year-old school teacher, on May 29, 1808. They had five children together; two died in childhood. Grace died in 1828, and the following year Webster married Caroline Le Roy, daughter of a prominent New York merchant. 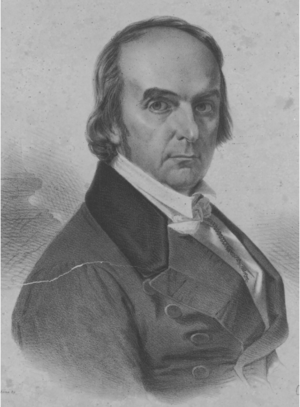 Webster leapt to political power in 1812, when he was elected to the House of Representatives as a Federalist, opposing the War of 1812. Six years later he achieved national prominence arguing before the U.S. Supreme Court in the case Dartmouth College v. Woodward, when the Court ruled in his favor that the Constitution’s Contract Clause protected the college from state interference. He also argued before the Supreme Court in the case McCulloch v. Maryland (1819), on the constitutionality of the national bank. In both cases, the Supreme Court of Justice John Marshall weakened the power of the states.

Webster was elected as Massachusetts’s U.S. senator in 1827, a role that allowed him to showcase his oratorical skills in defense of the union. In a famous debate with Senator Robert Hayne of South Carolina on the Senate floor in January 1830, the two men debated the nature of the union. Hayne, an ally of John C. Calhoun, advocated states’ rights and nullification. By contrast, Webster asserted that the Supreme Court, not the states, was the final arbiter of the American Constitution, ending one of his speeches against Hayne with the famous line, “Liberty and Union, now and forever, one and inseparable!”

In his later career Webster served as secretary of state for President William Henry Harrison and negotiated the Webster-Ashburton Treaty of 1842, which finally settled the United States’ northeastern border with Canada. Reelected to the Senate in 1845, he would argue in favor of the Compromise of 1850, putting his concern for the country as a whole over the particular interests of proslavery or antislavery politicians on both extremes. Webster died in 1852.