Appointed to the U.S. Supreme Court by President Richard M. Nixon, William H. Rehnquist served as associate justice from 1972 until 1986, when President Ronald Reagan elevated him to the position of chief justice. A state-centered conception of federalism ran through his judicial decision making and went far to explain the positions he had taken regarding not only the extent of federal legislative and judicial power, but also the constitutional protection of individual rights. 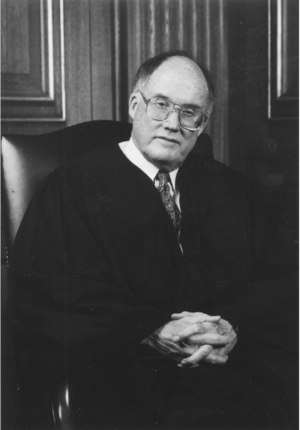 During the 1970's Rehnquist played a leading role in reviving the debate concerning the powers of Congress under the Commerce Clause. In 1995, he led the majority to invalidate a federal law—the Gun-Free School Zones Act of 1990—on the grounds that Congress had exceeded its constitutional authority to regulate interstate commerce (United States v. Lopez). Indeed, in 2000 it appeared that the chief justice had successfully brought an end to the Court’s deferential attitude toward Congress’s exercise of its commerce power and revived the pre-1937 requirement that Congress must demonstrate that the activity it seeks to regulate must have a substantial effect on interstate commerce when, in United States v. Morrison, the Court invalidated the Violence against Women Act, which authorized civil actions against individuals who commit crimes of violence motivated by gender. Rehnquist, in short, had been instrumental in reversing the Court’s long-standing tradition of deferring to Congress’s use of its power under the Commerce Clause. Moreover, he had played an active role in limiting the power of the federal courts by construing the Eleventh Amendment as a bar to federal suits brought by individuals against state agencies.

Rehnquist’s state-centered federalism had also had a major impact on the Court’s decisions in the area of the rights of individuals accused of crimes. Over the course of his career, he had consistently supported state policies regarding law enforcement over the rights of the individual. He referred to the process by which the Court incorporated the Bill of Rights in the 1960's as a “mysterious process of transmogrification” and endorsed the earlier approach whereby the states were not required to comply with the Bill of Rights but only to treat individual with “fundamental fairness.” Rehnquist also played an active role in the Court’s efforts to limit the Miranda rules, endorsing exceptions to the mandate that the police advise suspects in custody of their rights before questioning them. He did, however, stop short of voting to overrule the Miranda requirements when the issue came before the Court in 2000. Rehnquist had also argued that the states should be allowed to execute individuals convicted of murder or of felony murder, even the mentally retarded and those who were 15 at the time they committed the crime. He had also taken an active role in limiting the availability of federal habeas corpus for death row appeals.

Rehnquist’s state-centered federalism also went far to explain his decision making regarding individual rights in areas other than the rights of the accused. He had made clear his view that there is no constitutionally protected right of a woman to terminate a pregnancy; therefore, abortion may be regulated by the states. He had taken a similar position with regard to the right to refuse medical treatment and the right to assisted suicide as well as the right of same-sex couples to engage in consensual sex. Rehnquist’s construction of the Fourteenth Amendment’s mandate to the states not to deny any person the “equal protection of the laws” is similarly narrow, thereby leaving considerable discretion to the states, particularly in the area of gender discrimination.

Although state-centered federalism appears to be at the center of Rehnquist’s agenda, his support for state power had not always been consistent. For example, when the Court was called upon to resolve the disputed election of 2000 the chief justice voted to reverse the decision of the Florida Supreme Court that would have required a recount (Bush v. Gore). Such inconsistencies promoted the perception of Rehnquist’s decision making as result oriented, driven by his conservative political agenda. While that may be accurate, it is important to note that the consequences of state autonomy are usually consistent with conservative political objectives such as facilitating the punishment of criminals and limiting constitutional prohibitions on discrimination based on race, gender, and sexual orientation.